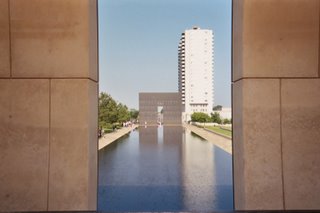 All the way back to the 1980s there has been constant criticism from social conservatives (like George Gilder with his famous “Men and Marriage”,as Gilder in turn invokes Aldous Huxley and "Brave New World") of meddling with natural reproduction in married, with any artificial technology like “test tube babies” or use of stem cells, and, especially pre-natal testing.

A AP story on Dec. 28, 2006, “Babies Created with genetic defects,” by Lindsey Turner, highlights these concerns. The story reports a survey of American clinics that found that 4 (out of about 120 clinics) reported embryo screening with intention of producing babies with specific disabilities, for parents who wanted to have offspring "like them." The Washington Times reprinted the story Dec 28.

The closest concept that I could find in the dictionary was something like “line breeding.” Now we all are aware of the moral and bioethical debate surrounding all of this. It need not all be accounted for here (President Bush weighed in on it during the early months of his presidency). Vatican theology, for example, demands openness to all new life, even though this imposes potential “burdens” on other people besides the legal parents, as part of its reverence for human life.

When I first saw the story, I was a bit shocked. Yet, I can give it a context, in the way I have been able to depict myself, with a concept called “dreamcatching.” Personal judgments do not matter here.

At least, thankfully there does not exist any genetic testing scheme that can guarantee that babies will be born straight (or gay). Remember the play and film "Twilight of the Golds"?
Posted by Bill Boushka at 4:56 PM

Anonymous said...
This comment has been removed by a blog administrator.
7:09 PM