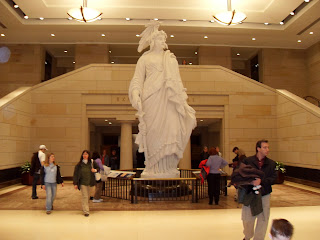 There’s more on professional journalism at the New York Times now, and this can have an indirect effect on blogger journalism.

On Dec. 15, 2008 reported Nicholas Kristoff blogged (on the Times site) about the Supreme Court’s refusal to life the dismissal of a libel suit against him and The New York Times for reporting the on Steve Hatfill, wrongfully identified by the FBI at one point in the anthrax investigations. (Since then, as we know, the government identified another employee at Fort Dietrick.) The blog entry is called “End of the Libel Road” (as if this were “Reservation Road” or even “Revolutionary Road”). The link is here. Kristoff makes another case for a journalistic source shield law, which is important to protect sources and provide the public full information. The comments are interesting and varied.

I’ve reported on the British libel tourism issue before, but I find that on Oct. 7, 2007, Rachel Donaldo had published an essay on the problem, “Life without Borders” (not “Doctors without Borders”) that provides a detailed analysis of the problem, here. Donaldo again discusses the case of Sheikh Khalid bin Mahfouz, as well as film director Roman Polanski. Congress needs to take this up in 2009.

But now we learn that the New York Times has been sued for libel over a piece that accused a lobbyist of having an affair with 2008 Republican presidential nominee John McCain. There are of copies of the AP story around, but a good read is a blog entry on “IUSB Vision” here, with some discussion of the “false light” concept. (Actually, I thought that “false light” was a specific form of “invasion of privacy” in the Restatement of Torts.)

These case refer largely to established newspapers and book publishers, but, as I’ve noted on my main blog, bloggers are coming into more risk, especially those who try to report first-hand on relatively private affairs of celebrities or politicians – as well as those, often in public school or even college, who like to play gossip girl. That ups the ante for a whole software service industry (and now established democratizing speech facility) that could some day face huge potential liability and insurance problems if we don’t start thinking about tort reform.
Posted by Bill Boushka at 4:07 PM